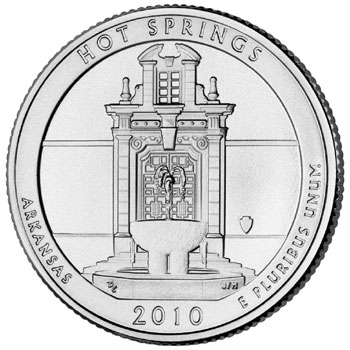 The Hot Springs National Park Quarter was released on January 26, 2010 as the first coin of the America the Beautiful Quarters Program. The site is located in the state of Arkansas and was federally designated on April 20, 1832.

The reverse design of the coin features the facade of the Hot Springs National Park headquarters building with a thermal spring fountain in the foreground and an ornate door in the background. The headquarters was built in the Spanish colonial revival style and completed in 1936. The inscriptions read “Hot Springs”, “Arkansas”, “2010”, and “E Pluribus Unum”. The reverse was designed by Don Everhart and sculpted by Joseph Menna.

“With the launch of the Hot Springs National Park Quarter, a uniquely American journey begins, a journey through coins in celebration of the beauty, history and impact of national sites in every state and territory,” Director Moy said.

Following the ceremony, attendees were able to exchange currency for rolls of the new Hot Springs National Park Quarters. Children aged 18 and younger received a free quarter to commemorate the day.

Even before Hot Springs National Park in Arkansas became a destination for vacations and relaxation, it was visited by many people, including Native Americans in prehistoric times, in order to experience the rejuvenating feeling of the warm water that bubbled from the earth rich in minerals. Many crude bathhouses built of logs were built around this Arkansas town after it became part of the United States in the Louisiana Purchase of 1803, in order to better provide a place for people to change and relax in the water.

Because people recognized the value of the hot springs as a tourist attraction, they sought the government’s help in preserving its natural beauty. In 1832 President Andrew Jackson signed the legislation that would prevent anyone from building or developing on the land in or around the hot springs by designating the area as a national reservation. This made the Arkansas Hot Springs one of the oldest federally designated sites in the entire country, even older than Yellowstone which would not be dedicated until forty years later. Hot Springs Reservation became Hot Springs National Park in 1921 by an act of Congress.

In May of 1933, H. Raymond Gregg was selected to be the first ever policeman of the Hot Springs National Park. He was extremely proficient in science, especially botany, and actually performed the duties of the Park’s first naturalist, a tradition that lives on today.