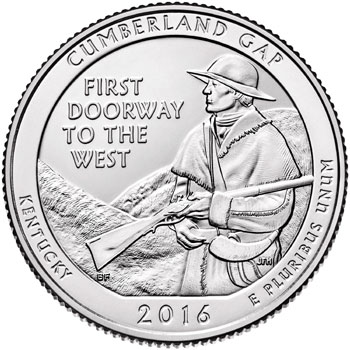 The Cumberland Gap National Historical Park Quarter represented the thirty-second overall release within the America the Beautiful Quarters Program. The site represents the state of Kentucky and was federally designated on June 11, 1940.

The reverse design features a frontiersman gazing across the mountains to the West. The Cumberland Gap is a break in the Appalachian Mountain chain which served as the first gateway into the western wilderness of Kentucky and Tennessee. The inscriptions read “First Doorway to the West”, “Cumberland Gap”, “Kentucky”, “2016”, and “E Pluribus Unum”. The reverse was designed by Artistic Infusion Program artist Barbara Fox and sculpted by Joseph Menna. 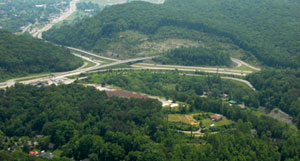 First established as a protected area by the federal government in June of 1940, the Park is a showcase of the best and most beautiful features that the Appalachians have to offer. Visitors to the park are invited to enjoy the lush vegetation that is indicative of the immense amount of moisture that falls every year in the Appalachian region.

The Park is also home to many unique types of wildlife, like white-tailed deer, wild turkey, black bear and rabbit; any of which are likely to be spotted by observers that visit the park.  The park also acts as a haven for the endangered Indiana Bat as well as fifty-nine state-listed rare plant species. One of the most unique features of the Park has to be its extensive cave system, which gives visitors a chance to experience life underground.