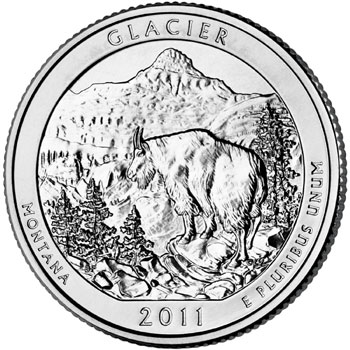 The Glacier National Park Quarter was released on April 4, 2011 as the seventh overall release within the America the Beautiful Quarters Program. The site is located in the state of Montana and was federally designated on February 22, 1897.

The Denver Mint struck 31,200,000 coins for circulation, while the Philadelphia Mint struck 30,400,000 coins. Proof and silver proof coins were produced at the San Francisco Mint.

One day prior to the official circulation release date and three days prior to National Park Week, the United States Mint and National Park Service hosted a launch ceremony for the Glacier National Park Quarter. Similar ceremonies had been held for each of the previously released America the Beautiful Quarters. The event was open to the public and attended by US Mint Associate Director for Sales and Marketing B.B. Craig and Park Superintendent Chas Cartwright.

Craig remarked, “The Glacier National Park quarter will connect America to the wonder, grandeur and beauty of one of the Nation’s most awe-inspiring natural treasures.”

Following the ceremony, attendees were invited to exchange their paper currency for $10 rolls containing the newly released Glacier Quarters. Children in attendance received a free quarter to commemorate the event. 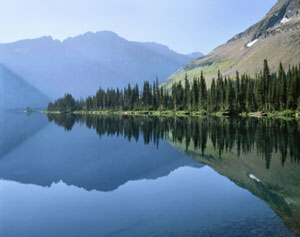 Like many of our most treasured wild areas, Glacier National Park in Montana was inhabited and loved by the Native Americans long before any European settlers arrived there. There is archeological evidence that humans were living in the mountains and plains of Montana almost ten thousand years ago.

It was not until the 1800’s however, that pioneers like Lewis and Clark began to take expeditions to explore and map out these wild areas as they trapped and hunted for their livelihoods. As forest trails became roads, and treacherous roads became railroads, more and more people became interested in what adventure and fortune might lie out in the wilds of the Western forests.

As the 1900’s dawned and a new century began, people in America began to slowly understand that there can sometimes be more value in a piece of land than simply the resources that you can extract from it. Sometimes land can be valuable just because of its unique beauty and wildlife.

George Bird Grinnell was one of the people that agreed with this state of mind, and he worked hard to convince the federal government that the forests and glaciers of the western part of Montana were worth preserving just the way they were. Although the area was first made into Forest Preserve in 1900, this designation still left the area open to the developments of homesteaders and miners. Grinnell did not rest until President Taft officially signed legislation making Glacier the tenth National Park in the nation. Today, visitors can still enjoy camping, hiking, fishing and hunting in the Park, as well as a stay in one of its historic lodges.