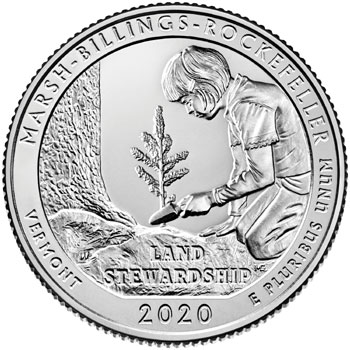 The Marsh-Billings-Rockefeller National Historical Park Quarter was the fifty-fourth overall release within the America the Beautiful Quarters Program. The site represents the state of Vermont and was federally designated on August 26, 1992.

The reverse design depicts a young girl planting a Norway spruce seedling near an established tree, continuing the life cycle of the forest. The site is the only national park dedicated to telling the story of conservation history and the evolving nature of land stewardship in America. The inscriptions read “Land Stewardship”, “Marsh-Billings-Rockefeller”, “Vermont”, “2020”, and “E Pluribus Unum”. The reverse was designed by United States Mint Artistic Infusion Program Designer Dona Weaver and sculpted by Michael Gaudioso.

Although the New England states are some of the smallest in the country, they make up for it in the richness of their culture and history. Because these were some of the first states ever to be settled by European immigrants, they contain some of the oldest structures in the entire country. If you are looking to experience the height of New England scenery and historical significance, you should definitely plan a visit to Marsh-Billings-Rockefeller National Historical Park in Vermont. Throughout the country, we are slowly realizing the importance of protecting our wild and natural places so that we can always have someplace to go and reflect about our early beginnings. The Marsh-Billings-Rockefeller National Historical Park is a testament to how beautiful it can be when people work together with each other to be good stewards of the land we have.

Officially dedicated as a National Park in 1992, Marsh-Billings-Rockefeller National Historical Park is located in some of Vermont’s most beautiful scenery. Visitors to the park in the fall season will marvel at the striking colors of the changing maple and ancient hemlock trees. This is one of the only national parks in the entire country to be able to tell the dynamic story of how conservation and land stewardship have evolved in this country. This property was the childhood home of one of America’s greatest conservationists, Frederick Billings. Later, the land was purchased and then donated back to the American people by Laurance S. and Mary F. Rockefeller. It was officially designated as federal protected lands by President George Bush.