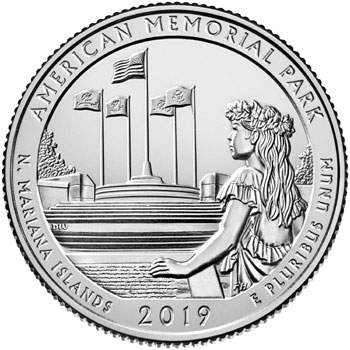 The American Memorial Park Quarter was the forty-seventh overall release within the America the Beautiful Quarters Program. The site represents the territory of the Northern Mariana Islands and was federally designated on August 18, 1978.

The reverse depicts a young Chamorro woman in traditional dress at the front of the Flag Circle and Court of Honor at American Memorial Park. The park honors the American and Marianas people who gave their lives in the Marianas Campaign of World War II. The inscriptions read “American Memorial Park”, “N. Mariana Islands”, “2019”, and “E Pluribus Unum”. The reverse was designed by United States Mint Artistic Infusion Program Designer Donna Weaver and sculpted by Phebe Hemphill.

As American citizens, we know how much of an impact World War II had on our culture, our military, and the way that our country developed when the soldiers came back from the foreign theater. What we don’t often consider is how the battles of World War II affected the people of other countries on whose shores they were fought. While there were many significant battles that took place in Europe during the Second World War, the Marianas Campaign of World War II is considered by many to be the most crucial battle of the Pacific theater. By successfully taking control of Saipan in July of 1944, the American Marines were able to eliminate a link in the supply chain of the Japanese troops. Cut off from badly needed supplies, the Japanese troops would surrender just fourteen months later.

When the military finally issues orders to cease all violent actions toward Japanese military and private citizens, it was time to stop and think about the sacrifices that have been made and the lives that had been lost in the pursuit of that victory. The American Memorial Park that was eventually built in the Northern Mariana Islands is a place where both the American soldiers and Mariana citizens that died during that all important battle can be remembered and honored. Officially recognized by the National Parks Service in 1978, American Memorial Park is built on one hundred and thirty three acres of land on the coast of Saipan. American flags fly high there as part of the memorial that bears the names of over five thousand brave souls that gave up their lives for the freedom of others.