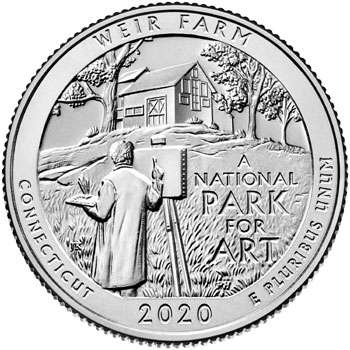 The Weir Farm National Historic Site Quarter was the fifty-second overall release within the America the Beautiful Quarters Program. The site represents the state of Connecticut and was federally designated on October 31, 1990.

The reverse design portrays an artist painting outside Julian Alden Weir’s studio at Weir Farm. This design was inspired by various images of the studio and Weir’s paintings created on the property, which drew creative inspiration from the rural environment. The inscriptions read “A National Park for Art”, “Weir Farm”, “Connecticut”, “2020”, and “E Pluribus Unum”. The reverse was designed by United States Mint Artistic Infusion Program Designer Justin Kunz and engraved by Phebe Hemphill.

Although soldiers, explorers and pioneers get a lot of the credit for making this country into what it is today, we would be remiss if we failed to recognize the poets and artists that gave us the words and pictures to immortalize the early days of the United States forever. J. Alden Weir was just a young man when he first got on a train in the summer of 1882, and left New York for his farm in Connecticut. Weir was already an artist interested in painting the landscapes and secret images of rural life that he believed had such close ties to the American Spirit. Eventually, his farm would become a haven for artists that sought to be reconnected and inspired by the countryside around them. Three generations of artists have lived, worked and been inspired by the New England landscapes that surround this historical place.

Originally recognized by the federal government as a site that was important to the cultural development of this country in 1990, the Weir Farm has developed into a place where many different kinds of people can seek solace from the bustle of urban life. Many people visit the farm in an attempt to reconnect with the simple beauty that inspired so many different types of people in the early days of the United States. Visitors to farm are welcomed to tour the farmhouse and view the works of Weir and his successors that have created their inspiring paintings and sculptures within its boundaries. Visitors can also tour the grounds, which are home to a unique collection of native flora and fauna.