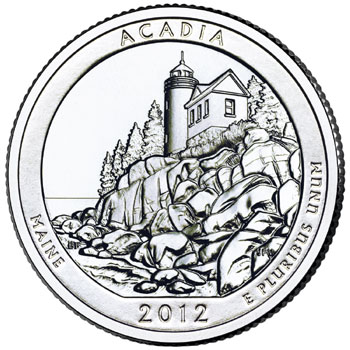 The Acadia National Park Quarter was the thirteenth overall release for the America the Beautiful Quarters Program. The site is located in the state of Maine and was federally designated on July 8, 1916.

The reverse design of the coin contains a depiction incorporating elements representative of Acadia: the ocean, the coastline, a lighthouse, and pine trees. These are presented through a depiction of the Bass Harbor Head Lighthouse, located along the coastline. Inscriptions read “Acadia”, “Maine”, “2012”, and “E Pluribus Unum”. The reverse was designed by Barbara Fox and sculpted by Joseph Menna.

The 2012-D Acadia Quarter marked the absolute mintage low for the series for a regular circulation issue. There were a mere 21,606,000 pieces struck, which was narrowly lower than the prior 2012-P and 2012-D Chaco Culture Quarters. 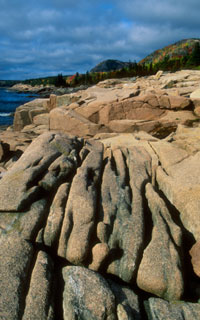 The eastern cost of the United States has always had an undeniable connection to the very first people European explorers that ever set foot in this country. No matter whether they came seeking fortune or just the quiet protection of a new land where they could practice their beliefs, the ocean was the highway that brought them here.

Once the cities and towns of the early Northeastern towns began to become heavily populated, the well to do residents sought out beautiful locations in more Northern states to which they could travel when they wanted to get away from the hustle and bustle of city life. The rocky shores and peninsulas of Maine had a particular allure for these vacationers, and many traveled to the pristine areas of Mount Desert Island, Bar Harbor and other harbor towns.

As more and more people discovered these beautiful areas, so did the developers and businessmen that sought to build them up. In the early 1900’s some of the more loyal residents became worried that the fast development in this part of the country would destroy the natural state of these areas, and began purchasing and protecting what land they could.

In 1913 the Trustees of Hancock County had acquired 500 acres and asked the federal government to consider making the land into a National Park. Woodrow Wilson agreed in 1916, making Sieur de Monts National Monument a protected area in Maine. Eventually, in 1929, the Schoodic Peninsula was donated to the park and the name was officially changed to Acadia National Park. Today the park is home to some of the most rugged and biologically diverse shoreline in the country.