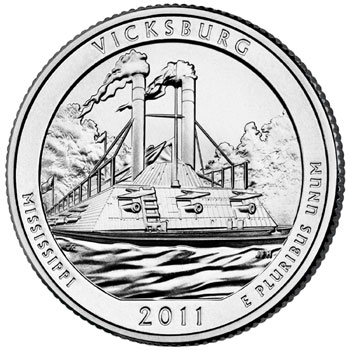 The Vicksburg National Military Park Quarter was released on August 29, 2011 as the ninth overall release within the America the Beautiful Quarters Program. The site is located in the state of Mississippi and was federally designated on February 21, 1899.

The reverse design of the coin depicts the USS Cairo on the Yazoo River as it would have looked when it served the Union Navy during the Civil War. The inscriptions read “Vicksburg”, “Mississippi”, “E Pluribus Unum”, and “2011”. The reverse was designed by United States Mint Artistic Infusion Program Master Designer Thomas Cleveland and sculpted by United States Mint Sculptor–Engraver Joseph Menna.

The Denver Mint struck 33,400,000 coins for circulation, while the Philadelphia Mint struck 30,800,000 coins. Proof and silver proof coins were produced at the San Francisco Mint.

On August 30, 2011, United States Mint and National Park Service officials held a launch ceremony for the Vicksburg National Military Park Quarter. This was the ninth such release ceremony held during the course of the program.

Following the ceremony, attendees were allowed to purchase rolls of the newly issued quarters at face value. Children aged 18 or younger were given a free quarter to commemorate the event. On the previous evening the United States Mint had hosted a coin collector forum to discuss coin initiatives and programs. 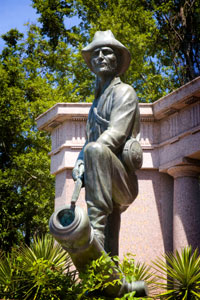 The Vicksburg National Military Park was established by Congress on February 21, 1899 to commemorative the siege and defense of Vicksburg. The park now includes 1,325 historic monuments and markers, 144 enplaced cannons, a restored Union gunboat, and 20 miles of reconstructed trenches. The park also includes the Vicksburg National Cemetery, which was established by Congress years earlier.

In the early wars of this country, it was often hard for the military to see that those who died in battle were given the honor and proper burial that they deserved. Especially in the Civil War, soldiers were usually hastily buried in the ground near the spot where they died. If it was possible, their fellow soldiers would try to mark the spot with stones or with wood that had been etched with their name.

In 1866, Congress agreed to declare one hundred and sixteen acres near Vicksburg Mississippi as a National Cemetery, and efforts got under way to exhume and recover the remains of those Union soldiers that had died in the Southeast during the Civil War.

Vicksburg is currently the largest National Cemetery in the country, and holds the remains of over 17,000 soldiers. Over seventy five percent of the graves at Vicksburg contain the remains of unidentified soldiers.