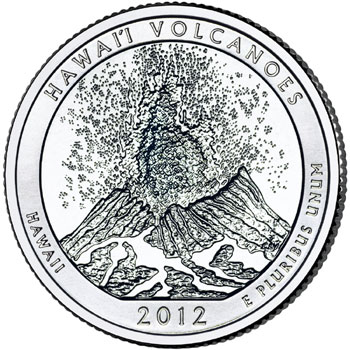 The Hawaii Volcanoes National Park Quarter was the fourteenth overall release for the America the Beautiful Quarters Program. The site is located in the state of Hawaii and was federally designated on August 1, 1916.

The reverse design for the coin contains a stunning depiction of an erupting volcano located on the east rift of the Kilaeua Volcano. The inscriptions appearing around the outer rim of the coin read “Hawai’i Volcanoes”, “Hawaii”, “2012”, and “E Pluribus Unum”. The reverse was designed and sculpted by Charles L. Vickers.

The Hawaii Volcanoes Quarter was officially released for circulation on August 27, 2012. On the same date, the US Mint began accepting orders for circulating quality coins in bags and rolls. Other numismatic products released during the year included America the Beautiful Quarters coin sets, annual sets, and bullion and collector five ounce silver coins. A new product offering for the year was circulating quality coins featuring the San Francisco Mint’s “S” mint mark

Mintage levels for the regular circulation strike versions of the coin would see a sharp increase. The Denver Mint struck 78,600,000 coins and the Philadelphia Mint struck 46,200,000 coins for an overall total of 124,800,000 pieces. 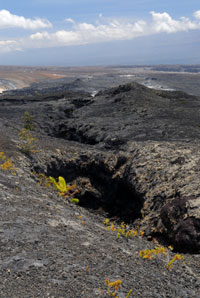 Hawaii Volcanoes National Park was established in August of 1916, and it is the home of some of the most unique opportunities for exploration and learning available. Hawaii is a land steeped in rich and mystical cultural beliefs, including the belief that the fiery craters that we now call volcanoes were the home of the goddess Pele. For many years, native men, women and children would journey high up on to the craters of Kilauea to offer sacrifices and gifts to appease the goddess. This was very dangerous, and as you might imagine, many lost their lives when the volcano would violently erupt.

Today we know that they formation of the Hawaiian islands is a direct result of many thousands of years of volcanic eruption, plate migration, and land evolution, which caused hardened lava and land masses to rise up out of the sea. Hawaii is one of the most beautiful, lush, and diverse habitats in the entire world and its history is deeply intertwined with the violent volcanoes that gave birth to it.

Many of the first western visitors to Hawaii were missionaries who came to spread the theology of Christianity to the native inhabitants. American missionary Asa Thurston was one of the first non-native humans to see a volcano erupt, and the experience affected his whole outlook on the power of nature. Thurston’s grandson would eventually be one of the strongest advocates of turning the area around Hilo into a National Park, and as a result, part of the park features a huge lava tube that is now named after his family.