The Yellowstone National Park Quarter was released on April 1, 2010 as the second coin of the America the Beautiful Quarters Program. The site is attributed to the state of Wyoming and was federally designated on March 1, 1872.

The reverse of the quarter depicts a scene of the famous geyser Old Faithful erupting with a mature bull bison in the foreground. The inscriptions read “Yellowstone”, “Wyoming”, “E Pluribus Unum”, and the date “2010”. The reverse was designed and sculpted by Don Everhart.

The United States Mint and National Park Service hosted a launch ceremony on June 3, 2010, to mark the release of the Yellowstone National Park Quarter. The ceremony was held within view of the iconic Old Faithful geyser.

A few thousand members of the public attended to see Mint Director Edmund Moy and Park Superintendent Suzanne Lewis co-host the event. Special guest speaker Paul Schullery, a noted Yellowstone historian and author, was also present. Attendees were able to exchange currency for rolls of the new quarters after the event. 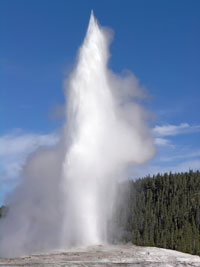 Long before Yellowstone National Park became of importance to the newly formed people and government of the United States of America, it was already considered sacred ground to the Native Americans. They used the area that we now know as Yellowstone as hunting grounds, a place to set up their temporary villages, and the center of many of their travel routes for trading and hunting. When you visit Yellowstone, which was officially named a National Park in 1872, it is easy to see why it was considered so valuable by all who passed through it. The area now enclosed by the Park contains a wide variety of wildlife and geothermal structures, including one of the most famous natural geysers, Old Faithful.

The reason that these geysers exist is that Yellowstone is thought to be centered right over the top of one of the largest super volcanoes in the whole continent of North America, known as the Yellowstone Caldera. All over Yellowstone National Park, you can see lava still flowing and also the rock formations that have formed as the lava cools after reaching the surface of the earth.

Another great thing about Yellowstone National Park is that it is home to some of the most diverse populations of fish, birds, mammals and reptiles in the entire country. Several of the species of animals that call the park home are endangered or threatened, making the protection of the Park very important to their survival. Although there are some paved roads around certain features of the park, much of it has remained unspoiled by human development, making it a unique place to reconnect with nature.