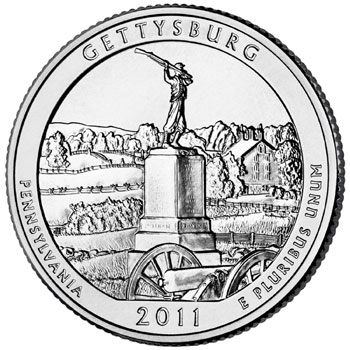 The Gettysburg National Military Park Quarter was released on January 24, 2011 as the sixth overall release within the America the Beautiful Quarters Program. The site is located in the state of Pennsylvania and was federally designated on February 11, 1895.

The reverse design is intended to represented Pickett’s Charge with a depiction of the 72nd Pennsylvania Infantry Monument at the battle line of the Union Army at Cemetery Ridge. The inscriptions read “Gettysburg”, “Pennsylvania”, “E Pluribus Unum”, and the date “2011”. The reverse was designed by Joel Iskowitz and sculpted by Phebe Hemphill.

An enthusiastic public audience was on hand for the event, which enjoyed a performance by the Gettysburg High School Civil War Ceremonies Brass Band. Attendees were able to exchange currency for rolls of the new quarters and children aged 18 and younger received a free coin. 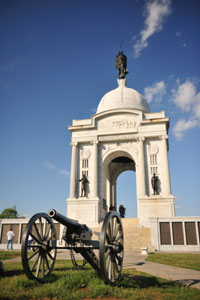 The purpose of national parks is to preserve an area that is special so that it can be enjoyed by future generations. Although many of these national areas are wild and untouched by human hands and meant to teach us about the importance of preserving nature, some are meant to teach us about the bravery and dedication of the Americans that have come before us. Gettysburg National Military Park is the site of an important turning point in the American Civil War.

In the summer of 1863, General Robert E. Lee was planning a second and even more aggressive attack on the Union troops that were stationed in the North. Few people realize that Lee’s army was gaining momentum at this point in the war, and many people thought that his attack on Gettysburg would be successful, and the Confederacy might win the war. The Union soldiers stationed at Gettysburg had other ideas. In one of the bloodiest battles in the entire war, with over fifty thousand people dead, Union soldiers stood strong and prevailed.

After this historic battle, President Abraham Lincoln stood at Gettysburg to deliver his famous “Gettysburg Address” which still inspires Americans to protect their country today. It would not be until 1895 when concerned citizens would remind the government of the important events that took place on the field at Gettysburg, that the site would be established as Gettysburg National Military Park.