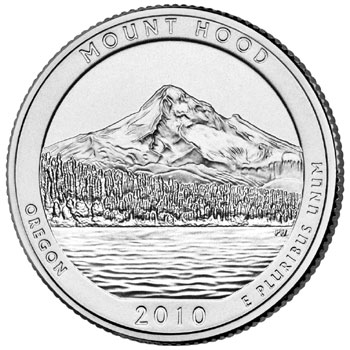 The Mount Hood National Forest Quarter was released on November 15, 2010 as the fifth coin of the America the Beautiful Quarters Program. The site is located in the state of Oregon and was federally designated on September 28, 1893.

The reverse design depicts a scenic view of Mount Hood with Lost Lake in the foreground. The inscriptions read “Oregon”, “Mount Hood”, “E Pluribus Unum”, and the date “2010”. The reverse was designed and sculpted by United States Mint Sculptor–Engraver Phebe Hemphill.

The Philadelphia and Denver Mints each  produced 34,400,000 coins. Proof and Silver proof coins were produced at the San Francisco Mint.

On November 17, 2010, the Mount Hood Quarter was officially presented to the public in a ceremony held at the World Forestry Center in Portland, Oregon.

United States Mint Deputy Director Andrew Brunhart remarked, “Each time Americans see this coin, they will connect with Mount Hood’s magnificent beauty, humbling presence and the spiritual qualities that beckon to us today as they did to early inhabitants.”

Also in attendance at the ceremony were Mount Hood National Forest Supervisor Gary Larsen, Oregon Treasurer Ted Wheeler, and chief meteorologist for KGW-TV Matt Zaffino. The ceremony was open to the public and attendees were allowed to exchange currency for rolls of the newly released quarters.

Oregon has its fair share of amazing scenery, from bubbling brooks to majestic, ancient trees that seem to extend for miles up into the sky. Just twenty miles from the bustling seafaring city of Portland, one can lose themselves in the over one million acres of the Mt. Hood National Forest. This protected area has provided lifetimes of opportunities to participate in outdoor activities like camping, hiking, fishing, hunting, skiing and boating.

Not only does the Mt. Hood National Forest boast of being home to the volcanic mountain itself, the Forest also extends to include the Columbia River Gorge as well as the Olallie Scenic Area. Many people don’t know that in addition to being the highest mountain in Oregon, Mount Hood is a stratovolcano that many scientists consider to be the mostly likely to erupt in the state although it has been dormant for many years.

In 1893, conservationists moved to create the Cascade Range Forest Preserve which marked the first official federal protection of the area. After several divisions and revisions of the name, the area we know now became the Mt. Hood National Forest in 1924. The Forest is a rare jewel in the collection of National protected areas, as it contains some of the largest portions of untouched wilderness anywhere in the country.