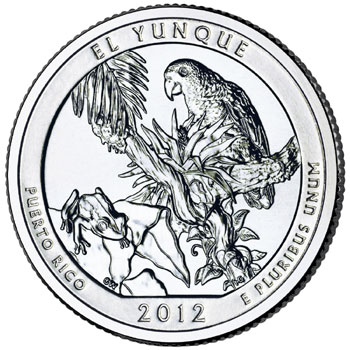 The El Yunque National Forest Quarter represented the eleventh overall release within the America the Beautiful Quarters Program. The site is located in the territory of Puerto Rico and was federally designated on January 17 ,1903. This was the first coin of the series to feature a site from one of the United States Territories. The scope of the program was written to include the five territories as well as the District of Columbia.

The reverse design of the coin features animals and foliage that are distinctive to the forest. The Coqui tree frog is on a leaf in the right side of the image, while a Puerto Rican parrot appears behind an epiphtye plant. Additional native flora are incorporated throughout the image. The inscriptions around the outer edge of the coin read “El Yunque”, “Puerto Rico”, “2012”, and “E Pluribus Unum”. The reverse was designed by Gary Whitley and sculpted by Michael Gaudioso.

The El Yunque Quarter was officially released for circulation on January 23, 2012. On the same date, the US Mint offered circulating quality coins with the “P” and “D” mint marks available in bags and rolls. Later in the year, the Mint also offered circulating quality coins with the “S” mint mark, representing a new type of numismatic product. The coins were also incorporated into various annual sets and America the Beautiful Quarters products. 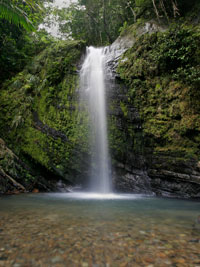 Some think that National parks and forests only exist inside the continental United States, but this certainly is not true. Puerto Rico was a country that was originally controlled by Spain in the days of early exploration to the New World. In 1876, King Alfonso of Spain decreed that the large and lustrous rain forest located on the slopes of the Sierra de Luquillo Mountains in Puerto Rico would be set aside as a natural reserve. This makes the El Yunque National Forest one of the oldest known natural reserves in the Western Hemisphere.

This marvelous area covers almost seventy thousand square miles of rain forest, and is home to over two hundred of the most unique species of plants and trees. Some of the plant and animal life that is found in the National Forest is not found anywhere else in the entire world. In April of 2007, President George W. Bush officially changed the name to the El Yunque National Forest to better reflect the unique heritage of the Puerto Rican people.