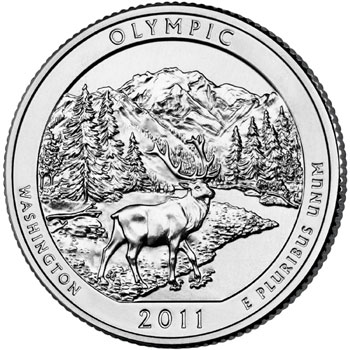 The Olympic National Park Quarter was released on June 13, 2011 as the eighth overall release within the America the Beautiful Quarters Program. The site is located in the state of Washington and was federally designated on February 22, 1897.

The reverse design depicts a Roosevelt elk standing on a gravel river bar of the Hoh River, with a view of Mount Olympus in the background. Inscriptions read “Olympic”, “Washington”, “E Pluribus Unum”, and the date “2011”. The reverse was designed by United States Mint Artistic Infusion Program Master Designer Susan Gamble and sculpted by United States Mint Sculptor–Engraver Michael Gaudioso.

The Philadelphia and Denver Mints each struck 30,500,000 coins for circulation. Proof and silver proof coins were produced at the San Francisco Mint.

To coincide with Flag Day on June 14, 2011, the United States Mint hosted a launch ceremony for the Olympic National Park Quarter. Similar ceremonies had been held for each precious release of the series.

In attendance were B.B. Craig, US Mint Director for Sales and Marketing, Karen Gustin, the Olympic National Park Superintendent, and Mike Gregoire, Washington’s First Gentleman. Craig said, “The beauty of Olympic National Park is in its biodiversity, three distinct ecosystems of sub-alpine, coastal and forest. There is no other national site like it, and the new Olympic National Park quarter will connect America to its natural splendor.”

The master of ceremonies declared the day “Quarter Day in the Classroom.” Children in attendance at the ceremony received a freshly minted Olympic National Park Quarter to commemorate the event.

The mountains of Washington State and their close proximity to the sea made them particularly interesting to early explorers looking for a passage across the American continent to the Pacific Ocean. Although many records exist claiming that seafaring men took expeditions up into the slopes of the Olympic Mountains in the mid-1800’s, the first documented ascent took place in 1885 in an expedition led by Melbourne Watkinson.

After this, expedition parties became much more prepared for the treacherous journey up into the slopes of the Olympics, and many started documenting the passes and trails that they had taken so that others could follow in their footsteps. Two such explorers were Lieutenant Joseph O’Neil and Judge James Wickersham who met while exploring the range in the 1890’s.

When asked to report on what he had seen in the Olympics, O’Neil would write that he found them to be of high value, and highly recommended that they be incorporated into a National Park to protect their beauty, and the sanctity of the endangered species they contained, most notably the elk.

In 1897 the majority of the forested land of the peninsula was incorporated into the Olympic Forest Reserve by Congress. As soon as the national park service was officially formed, the area was officially designated a National Park in 1938.